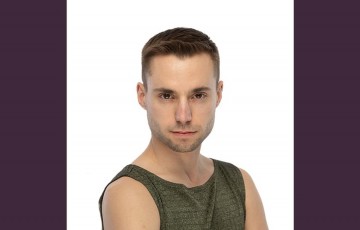 Zackery received his Bachelor of Fine Arts in Dance from Marymount Manhattan College with a concentration in Jazz.  Artistic Director for NSquared Dance, a New Hampshire based contemporary dance company. NSquared Dance was founded in New York City in 2014 & Zackery has toured to Seattle, Detroit, Philadelphia, Pittsburgh & Baltimore. NSquared has now established a home in Manchester, NH where he and Co-founder Nick Neagle reside. He has choreographed various works of choreography for the company as well as taught in various cities with NSquared. He has produced three split-bill performances in New York City and two solo tours to Portland, Maine. As a member of NSquared Dance, Zackery enjoys working side by side with his husband and being able to share many stages and performances with him! Zackery is also a seasoned dancer with Keigwin & Company, a prestigious New York City modern dance company.  Keigwin & Co. has given Zackery many performing & teaching opportunities throughout the United States and Abroad. He was fortunate enough to embark on a month-long exchange tour to Africa thanks to The US State Department and Brooklyn Academy of Music. He has performed on stages such as the Joyce Theater, Symphony Space, and New York City Center. Mr. Betty?s choreography credits include Lindenwood University, Portland Youth Dance, Bedford Dance Center?s Performance Troupe, Boston Arts Academy, Thornton Academy?s Dance Department, and he?s served as an artist in residence at Berwick Academy. He has also been a member and guest dancer with Tami Stronach Dance, Project 44, New Hampshire Dance Collective, Ballet Misha, & City Ballet of Boston. Zackery is also a regional representative for the New Hampshire Dance Alliance and is currently pursuing his MFA in Choreography at Wilson College!