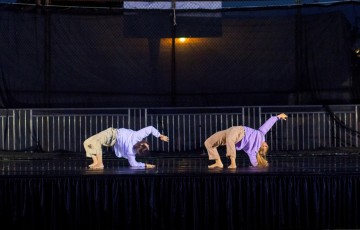 Tayler attended The Boston Conservatory for a BFA in contemporary Dance.  She spent summers studying in New York City, at Bates Dance Festival and One Body One Career intensives.  Tayler has studied with Janet Panetta, Marianne Hraibi, Michael Foley, Chris Aiken, Kathy Young, Jennifer Archibald, David Dorfman, Katiti King, Joy Davis and Anouk Van Dijk among others.  She has performed in works by Alvin Ailey, Martha Graham, Merce Cunnigham , Paul Taylor and Jose Limon. Tayler now lives and works in New York City as an independent performer and choreographer.  In 2017 Tayler attended the Gibney Professional training program in NYC for choreographic process creating and showing original work.  As a dancer and Melt method instructor she has since become a part of the Gibney community.  Tayler continues to perform and create while studying in the city and internationally with Countertechnique, Alexander technique and in Contemporary ballet.

The piece being presented is a work in progress that was started on her last rehearsal day before the first lockdown and studio closures in New York City.