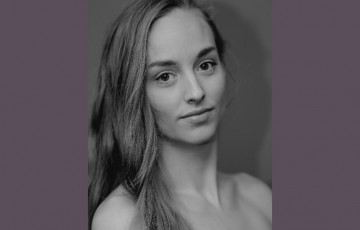 Elyssa Bigos started her training at the age of six at The Robertson's School of Classical Ballet with Larry and Colleen Robertson. She continued her training at various schools in the seacoast area with teachers such as Susan Duffy, Christine Simes, Elisa Gerasin, Edra Toth, and John Ling. She was a company member with Northeastern Ballet Theatre for two years and toured with Boston Dance Company for their production of "The Nutcracker". She has attended summer intensive programs at Festival Ballet Providence, Jose Mateo Ballet Theatre, and Burklyn Ballet Theatre where she was one of few chosen to perform in "Aladdin" at the Edinburgh Fringe Festival in Scotland. She also spent a summer at Carolina Ballet Theatre under the direction of Hernan Justo where she became a company trainee. Since returning to New Hampshire, Elyssa has performed as a guest artist with companies and schools across New England.